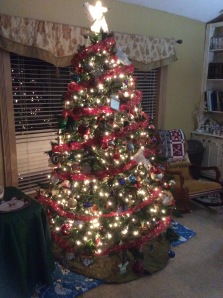 So another Christmas is over, and this is what our tree ended up looking like.  My oldest two sons assembled the tree.  Then the oldest son put the lights on it.  Then the younger three and my mom put the ornaments on it.  My youngest son began putting the ribbon on, but it did not completely work.  So my husband made some minor adjustments and this is what it looked like after it was deemed to be complete.

We went to a candlelight Christmas Eve service that included singing, drama, Scripture readings and candles.  It was a fairly good service.  Christmas morning we planned on getting up and attending church, but our plans were changed.  Our daughter woke up not feeling good, so we decided it was best to all stay home rather than split up the family.

My three sons helped keep their sister entertained.  We had a quiet day and everyone seemed to enjoy themselves.  We had a pot roast, rice, green beans and corn along with my husband’s homemade biscuits.

We watched some movies as a family along with playing a rousing game of Yahtzee, which our oldest won.  Then we fixed a buffet including tuna fish salad, shrimp salad, boiled shrimp with cocktail sauce, carrot sticks, crackers, cheese, olives, pickles and other items.  Everyone seemed to enjoy themselves.

Now it is time to start preparing for the start of a new year.  How did your Christmas go?  I would love to hear from you.

So it used to be every year without fail my husband and I would put up our Christmas tree the day after Thanksgiving. Then life with children started affecting our ability to do that. Every year, it seems like it gets later and later before our tree is up. I watch post after post on Facebook showing others who have their trees and decorations up. We also used to put up outside lights, but that has become hit or miss being in the military. Some houses lend themselves to it, while others do not.

We used to take the time to make candy, do crafts along with other activities, but some of those have gone by the wayside now. This does not mean I do not still enjoy doing those things. It just means that other things are taking priority. I still enjoy sitting by the tree either at night or first thing in the morning with the love of my life gazing at the lights.

In the past, my husband set up the tree and put the lights, but now that job has been passed to my oldest son. I have to say my husband has actually done an excellent job teaching Jacob how to do the job. Last night, while unpacking some of our Christmas things, my husband found Christmas lights we had forgotten we had bought.

You see last year we bought 12 strands of lights that were unequivocally duds. Each and every day, without fail, a strand of lights would go out. “Poof” a strand would go out. Let me say my son gets gold stars for being able to remove and rearrange strands of lights on a fully decorated tree. It was definitely a challenging task. But he came through with flying colors. This year we are sending prayers that our lights work better.

So when Thursday rolls around, we will try to finish decorating our tree and I will post pictures of the final product.

So what special activities do you do for the holidays?  I would love to hear from you.

So it is hard to believe it is almost Christmas.  For the past several years, we lived in the state of Pennsylvania.  First, in the western part and then in the central part.  Both places we were surrounded by mountains.  We were almost guaranteed to have a white Christmas – even if it was just because there was still snow on the ground.  It is hard to believe it has been 8 years since we left eastern North Carolina courtesy of the Army Reserves.  Now we are on our third station since then.  For the second time, in his tour of active duty reserves, we are at the company level.  This means more soldiers to care for and more work with being the Family Readiness Group leader.

Our children are now eight years older.  It is hard to believe that in June our oldest will be turning twenty-one.  Time seems to just fly by and I am not sure where it has flown to.  Before I know it, all of our children will be grown and gone making their own  way in the world.  But at least for now, I still have several years of knowing they are at home with me.

This picture was taken in February as we were driving through Pennsylvania on our way to Texas to see if we could find some place to live.

Finally, this is a picture from our last home in Pennsylvania, with the snow. 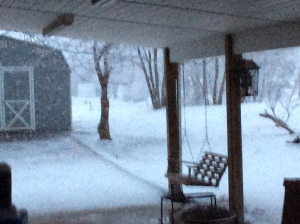 Now we live in Texas on the gulf coast side of the state, and it will take a miracle for us to see snow.  It is going to be hard to adjust to warm temperatures – especially in December.  But when I take the time to stop and think, I realize that for half of the earth, Christmas comes in the midst of their summer, so what do I have to complain about.  This morning I was reading a blog post by a friend of mine and she talked about perspective and how it can change our views basically.  It reminds me I need to focus on the positive things rather than the negative ones.  It is so easy to fall into the trap of expecting what I want, when I want it and how I want it; rather than being thankful for all the blessings we have. After all, there are not too many places in February where this could happen:

Even though the water was somewhat cold in February, they really enjoyed themselves in the pool.  So we are trying to find a new normal and new traditions in our new town.  But it still takes some time to adjust and adapt.

So how are holiday preparations going where you are?  I would love to hear from you.

So I was looking back through my past posts and I realized I have been rather neglectful of this blog.  So I plan on changing that starting today.  The first topic I want to cover is math.

I have three sons: ages 20, 18, and 16 plus a daughter who is 14.  With the exception of the 16-year-old, they somehow all missed getting a love of math from their father and me.  It seems ironic to me with having a mom who has actually taught math in the Public School System, that some of that knowledge and love would have been passed on to them.  Maybe that is why only the 16-year old has it (seeing how I was actually teaching math when I was pregnant with him).

But the facts remain the rest of my children do not love math!  So through the years, we have tried a variety of math products.  Some we have loved.  Some I have been the only one that loved them.  Others have been miserable failures.  Over the next several days, I will share what has worked and what has not worked for our family or even for particular children.

What is working for you right now?  I would love to hear from you.

Today is the final day of my Scriptures of Praise series.  I pray this series has been a blessing to you.  The Scripture I have selected for today is Philippians 4:8.  Here is the Scripture graphic I created for it.

I feel this is the perfect verse to end this series with today.  We should concentrate on things that are pure, lovely and good.  We need to praise God for these things.  I pray  for God to bless you today with so many blessings you constantly find yourself praising Him.

I would love to hear from you.

Today is day 30 of my Scriptures of Praise series.  The Scripture I have selected for today is Psalm 45:17.  Here is the Scripture graphic I created.

So what are you finding to praise God for today?  I would love to hear from you.

Today is day 29 of my Scriptures of Praise series.  The verse I have selected for today is Acts 16:25.  Here is the Scripture graphic I have created.

Today is day 28 of my Scriptures of Praise series.  The verse I have selected for today is Psalm 56:4.  Here is the Scripture graphic I have created for today. 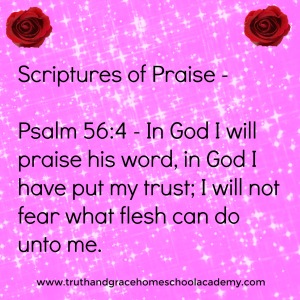 Today is day 27 of my Scriptures of Praise series.  The Scripture I have selected for today is Jeremiah 17:14.  Here is the graphic I created for it. 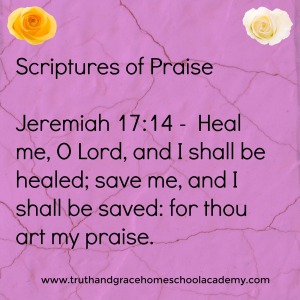