These are anxious times. The unknown is scary whether anxiety is something you struggle with on a daily basis or only on occasions that are unfamiliar and uncomfortable for everyone.

Most of us have at least a little anxiety right now thanks to COVID-19. But, God’s word has a lot to say about feeling fearful and anxious. The following is an excerpt from A Small Book for the Anxious Heart by Edward T. Welch, a small but powerful devotional book to remind us of the encouraging, beautiful words in Scripture to anxious people.
Don’t Be Anxious… Pray
By Ed Welch 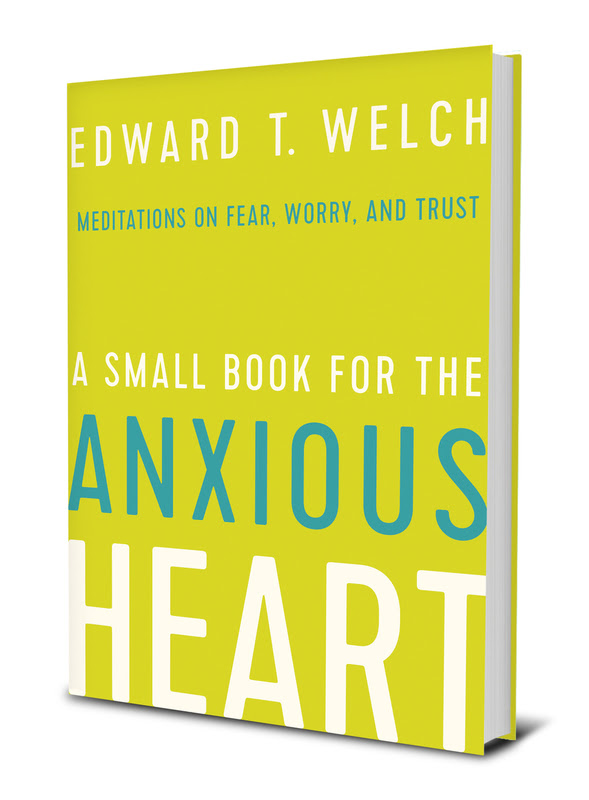 This sounds too simple.

Do not be anxious about anything, but   in every situation, by prayer and petition, with thanksgiving, present your requests to God. (Philippians 4:6 NIV)

But don’t brush this off as trite and simplistic. Every other way of dealing with fears and anxieties relies on some technology, medicine, and/or self-talk. But we all know—even children know—that our anxieties need the right person,
and you know that person.

Have you tried this when you are anxious? Have you ever answered your anxious thoughts with Scripture-led prayer? It turns out that this seemingly simple and available-to-all teaching is one of the hidden and underused treasures of Scripture. It only sounds trite if you haven’t practiced it.

It is simple, but, like the simple instruction to “love one another,” it takes a lifetime to master.

Those who consistently respond to anxiety with prayer are the sages in our midst. Too often we brush off this passage and look for something more complicated. Meanwhile, this wonderfully compact teaching stands waiting for us.

The last thirty years of my life have been spent shortening the time lag between the appearance of anxiety and the onset of prayer. That gap has gone from two days down to one, and then down to an hour. Occasionally, prayer comes even before my anxiety is full-blown. When that happens, I marvel at the power of God that equips me to do what is counterintuitive. Left to myself I spin out doomsday scenarios, hoping that my frenetic mind will stumble into some answers. But when I go to my heavenly Father and tell him my worries, when I remember his words to me (an ever-present help in trouble), and when I thank him for his care, the peace of Christ does begin to rule my heart and mind. It’s a miracle that still takes me by surprise.

For this passage to come alive to you, you have to know that God is near. Paul mentions that right before he tells the Philippians to replace anxiety with prayer (Philippians 4:5). Do you have an image for that yet? For the ancient
Israelites, God was just on the other side of a curtain, residing in his Holy of Holies. Now, Immanuel—God-with-us—is in us and we are in him.

Are you persuaded that he wants you to talk to him? This is what happens in the best of relationships. We speak of what is heavy on our hearts, and the other person never minimizes our struggle. Although the Lord knows your thoughts and feelings before you do, he values you actually putting those thoughts and feelings into words and into prayer.

Welcome to the deep wisdom of God that is available to us through Jesus.

Excerpted from A Small Book for the Anxious Heart by Ed Welch. © 2019 by New Growth Press.

Edward T. Welch, MDiv, PhD, is a licensed psychologist and faculty member at CCEF. He has been counseling for more than thirty-five years and has written extensively on the topics of depression, fear, and addictions.

Want to read more? You can get a copy of A Small Book for the Anxious Heart on the New Growth Press website. They are still on a regular shipping schedule. It is available in print and eBook formats.

Visit https://newgrowthpress.com/resources-for-anxiety/
for more resources on anxiety, worry and fear.

As the Great War rages on, Sunset Cove continues to feel its impact. Running the small town newspaper, Anna McDowell can’t escape the grim reports from the other side of the world, but home-front challenges abound as well. Dr. Daniel is serving the wounded on the front lines. And Katy, expecting her first child, with her husband in the trenches, tries to support the war effort with her Red Cross club. Even as the war winds down the costs are high—and Sunset Cove is not spared.

Continuing the story of the people in Sunset Cove, this fourth installment is definitely worth reading.  I have enjoyed getting to know Anna, Dr. Daniel, Anna’s daughter, and the other residents.  They seem to come alive through the pages of these stories.  I found it timely to read about the Spanish Flu coming to the United States.  I also found the reminders of what people endured both on the homefront and on the frontlines comes through the pages of this book.

I have enjoyed reading each of these stories, and I feel this does the series justice.  I have to say I would love to see another book in this series, however, if it stopped here, I could understand.  So if you enjoy reading books about the World Wars, check out this book for yourself. I definitely recommend this book.

Melody Carlson has written more than 200 books (with sales around 6.5 million) for teens, women, and children. That’s a lot of books, but mostly she considers herself a “storyteller.” Her young adult novels (Diary of a Teenage Girl, True Colors etc.) appeal to teenage girls around the world. Her annual Christmas novellas become more popular each year. She’s won a number of awards (including RT’s Career Achievement Award, the Rita, and the Gold medallion) and some of her books have been optioned for film/TV. Carlson has two grown sons and makes her home in the Pacific Northwest with her husband and yellow Lab dog.

Writing about the WW1 era has definitely been a good history lesson for me. Prohibition laws in Oregon (and rum-runners breaking them) combined with a massive war that changed the world and a global epidemic is worth paying attention to. Especially since history sometimes repeats itself. The early 20th century had a lot going on—much that seems nearly forgotten. I’m glad to see the movie 1917 is doing well—and we plan to see it this week. Although I’m not a fan of gruesome war movies, this era continues to intrigue me. Even as I wrapped up my Sunset Cove series with Turning Tide I was left wondering . . . what’s next? But isn’t that the beauty of story?

For the Love of Literature, March 16

Through the Fire Blogs, March 16

She Lives To Read, March 20

For Him and My Family, March 23

For the Love of Books, March 29

To celebrate her tour, Melody is giving away the grand prize package of a complete set of The Legacy of Sunset Cove series!!