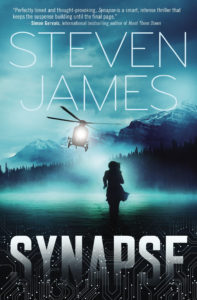 Thirty years in the future, when AI is so advanced that humans live side by side with cognizant robots called Artificials, Kestrel Hathaway must come to terms not just with what machines know, but what they believe. Is hope real for them, or merely an illusion?

Soon after experiencing a personal tragedy, Kestrel witnesses a terrorist attack and is drawn into a world of conspiracies and lies that she and Jordan, her Artificial, have to untangle. With a second, more brutal attack looming on the horizon, their best chance of stopping it is teaming up with federal counterterrorism agent Nick Vernon.

But the clock is ticking—and all the while, Jordan is asking questions that Artificials were never meant to ask.

Deftly weaving suspense and intrigue into a rich, resonant tale that explores faith and what it really means to be human, Steven James offers us a glimpse into the future and into our own hearts.

Kestrel, her AI Jordan, and Nick Vernon create an interesting trio to read about.  I found the story to keep my interest and attention.  The idea of reading a book set in the future with artificial intelligence, and suspense made me wonder about what the book would be like. As a conservative Christian, I had to broaden my ideas to accept a female pastor, but the storyline really worked at some points.  However, the idea of a devastating event forcing a Christian to step away from his or her faith is completely believable.

Jordan, the AI, poses thoughts and questions that cause Kestrel to stretch her ideas and beliefs.  The multiple storylines caused me to occasionally lose focus and interest in the book.

So if you want to read a book set in the future dealing with artificial intelligence and the future, check out this book for yourself.

Steven James is the critically acclaimed, national bestselling author of sixteen novels. His work has been optioned by ABC Studios and praised by Publishers Weekly, Library Journal, the New York Journal of Books, and many others. His pulse-pounding, award-winning thrillers are known for their intricate storylines and insightful explorations of good and evil.  When he’s not working on his next book, he’s either teaching master classes on writing throughout the country, trail running, or sneaking off to catch a matinee.

“James is a pro at creating suspense.”

I grew up reading and loving science fiction stories. I’ve always been intrigued by the idea of artificial intelligence, but as I’ve thought about it over the years, I’ve realized that our lives are not based just on what we know, but also what we believe. So, I started asking myself, “What would the world look like if machines developed artificial belief?” Within a few decades, advanced AIs might very well have consciousness and self-awareness. At that point, what will they choose to believe about the meaning of live, God, and the afterlife?

All of these questions were in my mind as I wrote Synapse, a story that takes place 30 years from now in a world very much like our own. This is a cautionary tale with implications that are both chilling and revealing and I think that if you like suspense, you’ll love this near-future thriller.

For The Love of Books, October 13

Through the Fire Blogs, October 16