We’ve all been there. We know that sneaking, small voice in our heads all too well—you’re too loud. Too quiet. Too young. Too old. Too unimportant. Too ugly. Too silly. Too serious. You’re not as successful as she is—look at her perfect family, look at her high-powered job, look at her great hair and size 4 skinny jeans. Why can’t you be more like her—be more in general? Why do you expect so much from everyone? Why can’t you take up less space? Ask for less? Be less? The lies track well-worn paths in our minds and our hearts, wearing us down and making us question our role in God’s kingdom.

Jess Connolly and Hayley Morgan, bestselling authors of Wild and Free will help you replace those lies with God’s truth. This devotional flip-book is designed for you, the woman who feels like she can be both too much and not enough—sometimes in the same day. When you banish lies and insecurities and find your identity in Jesus, you can embrace these truths: You are always enough. You are never too much.

The devotionals for “Always Enough” address the idea of not comparing ourselves to others and to “start living wild and free” according to the opening of the book. Each devotional includes a passage of Scripture and then a relatively short devotional passage that ties into the Scripture.

Then on the flip side of the book is for “Never Too Much”. Again, each devotional has a passage of Scripture and then a short passage that relates to the Scripture and to real life.

I personally love devotionals like this. It does not have to be read daily or chronologically. I can just pick it up and read it whenever the mood strikes me or I need to deal with the topics covered by the book.

I love how the book clearly lets the reader know which one of the authors wrote each devotional. As someone who has questioned my worth of whether I am enough for God or not, I found this book touched my heart. The devotional entitled, “Even When You Don’t Have Enough Friends” by Hayley really spoke to me. Growing up, our family constantly moved from either one house to another or from one state to another. This made finding and keeping friends difficult. Now as a military wife who has moved three times since 2008 and one of those moves being from Pennsylvania to Texas, I can say this devotion was one I really needed to read. I love how the related Scripture passage is Proverbs 18:24.

Here are some photographs of some of my favorite devotions. 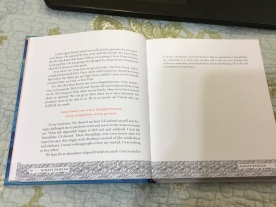 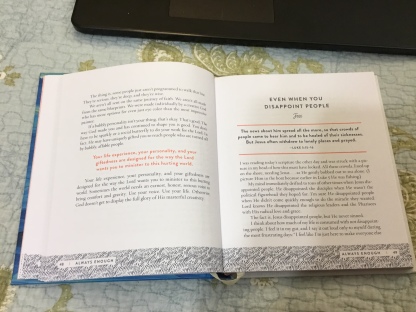 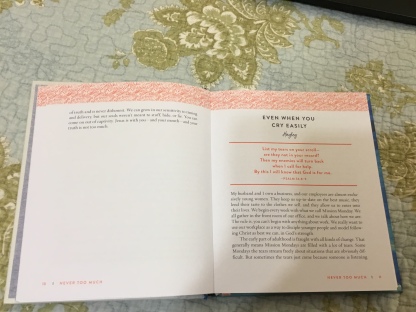 Click here or on the graphic below if you would like the opportunity to win your own copy of Always Enough, Never Too Much.

Paul (Faulkner), who goes from the most infamous persecutor of Christians to Christ’s most influential apostle, is spending his last days in a dark and bleak prison cell awaiting execution by Emperor Nero. Luke(Caviezel), his friend and physician, risks his life when he ventures into Rome to visit him. Paul is under the watchful eye of Mauritius (Martinez), the prison’s prefect, who seeks to understand how this broken old man can pose such a threat. But before Paul’s death sentence can be enacted, Luke resolves to write another book, one that details the beginnings of “The Way” and the birth of what will come to be known as the church. Their faith challenged an empire. But their words changed the world.

First, this film was extremely well-done.  The quality and the acting is incredible.   My husband and I watched this film together.  After watching the film, we both agreed the film starts off a little slow.  But by the end of the film, it really picks up.  I would caution though, you should have a good understanding of the Bible before watching this film.  Otherwise, you may find yourself lost.

Another word of caution, the action becomes hard to follow at times.  If you are not paying attention, you may lose the plot and storyline.  On the other hand, if you know your Bible and especially about the life of Paul, you will find this movie very well-done and true to the writings of Paul.  Many of the words spoken by Paul come directly from the Bible.

This movie is 148 minutes long and is rated PG-13.  I feel this raiting is appropriate given the fact there is some violence in the movie, which reflects actual events depicted in the Bible.  I feel the movie is very well done and follows the Scriptures very well.  The quality of the film is very realistic.  I would defnitely recommend this movie for watching, especially if you have a good knowledge of the writings of Paul.

Enter to win your chance to win a copy of this movie by clicking here or on the graphic below.